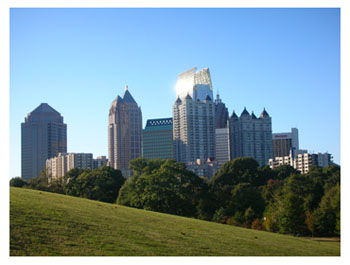 A workforce trends report, issued today by the Metro Atlanta Chamber (MAC), shows that the city is becoming a “digital media super hub,” with nearly twice the digital media job openings per capita as the rest of the nation. It is also strong in mobile technology, healthcare IT, and logistics.

The Chamber says overall online job postings in metro Atlanta have grown 4.5 times faster than postings nationally in the areas of supply chain and logistics, technology and bioscience.

“The report gives us confirmation of where the jobs are, and the growth of metro Atlanta’s key industries,” said Phil Martens, CEO of Novelis, Inc., and chair of MAC’s Workforce Council. “MAC has its finger on the pulse of job activity in metro Atlanta.”

Supply chain/logistics/distribution job postings grew nationally at a rate of 36 percent from 2010 – 2012. However, in metro Atlanta that growth rate was 115 percent over the same period.

There were also large spikes in recruitment in other MAC targeted industries. There was a 202% increase in the number of advertised positions in the mobility sector from 2010 – 2012. And as the nation’s health IT capital, Atlanta continues to surge with 167% growth in health IT-related job postings over the same period.

Martens added, “The goal of this report was to assess the demand for talent, and then determine the skills needed to fill the positions.”

“One of the most significant findings of the report showed that in 2010, there were 247,283 total jobs posted in metro Atlanta in all sectors.  In 2012, there were 410,571, a 60 percent increase,” said Sam A. Williams, MAC president. “The increase demonstrates that metro Atlanta continues to be a thriving hub for business, especially in key industry sectors.”

In tandem with the Workforce Trends Report, MAC also launched a workforce database. The site is geared toward the CEO, CIO, HR professional or other senior staffer involved in hiring and staffing, but casual browsers are also welcomed.

This inventory is the largest and most comprehensive listing of those resources for several of the fastest-growing industry sectors in the region. These include: digital media and gaming, financial transactions processing, healthcare IT, internet security, logistics/distribution, software development, supply chain software and wireless/mobility.

“Between the report and the database, we now know where the growing jobs are and the skills needed to fill those positions,” saidScott Burton, managing director at Whitaker-Taylor, and MAC’s Workforce Council co-chair. “Our goal with the database is to link employers to tools that can help fill job openings with talented, capable employees. The exact talent we need to grow our company.”

The database was developed by MAC’s Workforce Council, in partnership with the Atlanta Regional Commission’s Workforce Solutions team, and can be accessed at: http://www.metroatlantachamber.com/economic-development/workforce-development

IT pros need communication skills as much as tech chops